Scientists are discovering the link between happiness and dirt. That’s right, getting your hands into some dirt can mean more happiness. Why? Well, apparently there’s a little critter in the dirt known as Mycobacterium vaccae that has similar effects on the human brain as Prozac and other pharmaceuticals but without the negative side effects and chemical dependency. This little bacterium stimulates serotonin production which helps to decrease agitation, anxiety and increase overall happiness. Huh! So, for thousands of years, humans have been domesticating and planting crops, digging wells and canals, digging for minerals, digging to catch animals, digging to make shelters, roads, fields, and fence posts, digging, digging, digging. It’s no wonder that our human habits of churning the earth’s crust have continued unabated into our modern era despite all of our newly developed technology and sophistication!

As a bonus, the effect of the bacteria not only lowers stress and improves mood and vitality, but cognitive function and concentration is improved as well. It gets better! M vaccae has demonstrated anti-mutagenic properties useful in preventing cancer, rheumatoid arthritis and Crohn’s disease, and in boosting our immune system. Dirt particles may come in direct contact with the blood stream through a cut or abrasion during gardening activities. The means of absorbing the bacteria may or may not matter, but the effects of the contact may last up to three weeks! The testimony that the act of gardening does relieve stress is true – no surprise for some of us.

My kids (ages 5, 3, and 1) recently went to visit their Nanna, Granddad and cousins. Long-term landscape construction resulted in a huge, unavoidable, glorious mound of soil piled in the front yard. There was even a muddy spot next door where a small tree had been removed. My kids played in the dirt and mud and, soon enough, pure filthiness ensued. They discovered that if you pack the dirt just right, you can scoot yourself from the top of the mound to the bottom, face first, as if on the world’s greatest slide. There was dirt in hair, mouths, and little jean pockets.  So, take some advice from my kids. If you want to be happy, make sure to get in a healthy dose of dirt before your bath! 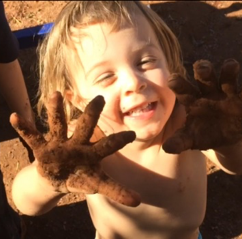 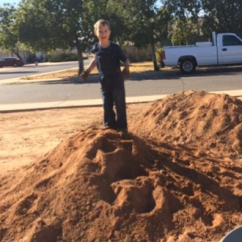 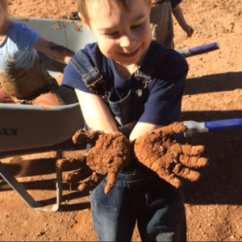 Grant, B. L. (2017, March 27). Soil Microbes And Human Health – Learn About The Natural Antidepressant In Soil. Retrieved February 11, 2018, from https://www.gardeningknowhow.com/garden-how-to/soil-fertilizers/antidepressant-microbes-soil.htm

It’s in the Dirt! Bacteria in soil may make us happier, smarter. (2011, January). Retrieved February 11, 2018, from http://www.healinglandscapes.org/blog/2011/01/its-in-thedirtbacteria-in-soil-makes-us-happier-smarter/